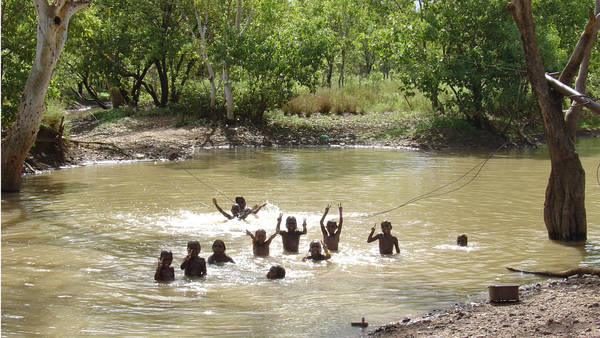 Linguist Finds a Language in Its Infancy: Warlpiri rampaku, or Light Warlpiri, is a new language spoken only by people under 35 in Lajamanu, an isolated village of about 700 people in Australia’s Northern Territory.

There are many dying languages in the world. But at least one has recently been born, created by children living in a remote village in northern Australia.

Carmel O’Shannessy, a linguist at the University of Michigan, has been studying the young people’s speech for more than a decade and has concluded that they speak neither a dialect nor the mixture of languages called a creole, but a new language with unique grammatical rules.

The language, called Warlpiri rampaku, or Light Warlpiri, is spoken only by people under 35 in Lajamanu, an isolated village of about 700 people in Australia’s Northern Territory. In all, about 350 people speak the language as their native tongue. Dr. O’Shannessy has published several studies of Light Warlpiri, the most recent in the June issue of Language.

“Many of the first speakers of this language are still alive,” said Mary Laughren, a research fellow in linguistics at the University of Queensland in Australia, who was not involved in the studies. One reason Dr. O’Shannessy’s research is so significant, she said, “is that she has been able to record and document a ‘new’ language in the very early period of its existence.”

Everyone in Lajamanu also speaks “strong” Warlpiri, an aboriginal language unrelated to English and shared with about 4,000 people in several Australian villages. Many also speak Kriol, an English-based creole developed in the late 19th century and widely spoken in northern Australia among aboriginal people of many different native languages.

Lajamanu parents are happy to have their children learn English for use in the wider world, but eager to preserve Warlpiri as the language of their culture.

Lajamanu’s isolation may have something to do with the creation of a new way of speaking. The village is about 550 miles south of Darwin, and the nearest commercial center is Katherine, about 340 miles north. There are no completely paved roads.

An airplane, one of seven owned by Lajamanu Air, a community-managed airline, lands on the village’s dirt airstrip twice a week carrying mail from Katherine, and once a week a truck brings food and supplies sold in the village’s only store. A diesel generator and a solar energy plant supply electricity.

The village was established by the Australian government in 1948, without the consent of the people who would inhabit it. The native affairs branch of the federal government, concerned about overcrowding and drought in Yuendumu, forcibly removed 550 people from there to what would become Lajamanu. At least twice, the group walked all the way back to Yuendumu, only to be retransported when they arrived.

Contact with English is quite recent. “These people were hunters and gatherers, roaming over a territory,” said Dr. O’Shannessy. “But then along came white people, cattle stations, mines, and so on. People were kind of forced to stop hunting and gathering.”

By the 1970s, villagers had resigned themselves to their new home, and the Lajamanu Council had been set up as a self-governing community authority, the first in the Northern Territory. In the 2006 census, almost half the population was under 20, and the Australian government estimates that by 2026 the number of indigenous people 15 to 64 will increase to 650 from about 440 today.

Dr. O’Shannessy, who started investigating the language in 2002, spends three to eight weeks a year in Lajamanu. She speaks and understands both Warlpiri and Light Warlpiri, but is not fluent.

People in Lajamanu often engage in what linguists call code-switching, mixing languages together or changing from one to another as they speak. And many words in Light Warlpiri are derived from English or Kriol.

But Light Warlpiri is not simply a combination of words from different languages. Peter Bakker, an associate professor of linguistics at Aarhus University in Denmark who has published widely on language development, says Light Warlpiri cannot be a pidgin, because a pidgin has no native speakers. Nor can it be a creole, because a creole is a new language that combines two separate tongues.

“These young people have developed something entirely new,” he said. “Light Warlpiri is clearly a mother tongue.”

It is easy enough to see several nouns derived from English. But the -ria ending on “aus” (house) means “in” or “at,” and it comes from Warlpiri. The -m ending on the verb “si” (see) indicates that the event is either happening now or has already happened, a “present or past but not future” tense that does not exist in English or Warlpiri. This is a way of talking so different from either Walpiri or Kriol that it constitutes a new language.

The development of the language, Dr. O’Shannessy says, was a two-step process. It began with parents using baby talk with their children in a combination of the three languages. But then the children took that language as their native tongue by adding radical innovations to the syntax, especially in the use of verb structures, that are not present in any of the source languages.

Why a new language developed at this time and in this place is not entirely clear. It was not a case of people needing to communicate when they have no common language, a situation that can give rise to pidgin or creole.

Dr. Bakker says that new languages are discovered from time to time, but until now no one has been there at the beginning to see a language develop from children’s speech.

Dr. O’Shannessy suggests that subtle forces may be at work. “I think that identity plays a role,” she said. “After children created the new system, it has since become a marker of their identity as being young Warlpiri from the Lajamanu Community.”

The language is now so well established among young people that there is some question about the survival of strong Warlpiri. “How long the kids will keep multilingualism, I don’t know,” Dr. O’Shannessy said. “The elders would like to preserve Warlpiri, but I’m not sure it will be. Light Warlpiri seems quite robust.”

A version of this article appeared in print on July 16, 2013, on page D2 of the New York edition with the headline: A Village Invents a Language All Its Own.