Danny Burnside is 23 years old and describes himself as “the sort of lad that parents would tell their kids not to hang around with”.

He left school without any qualifications, and drifted in and out of short-term jobs in local factories.

But now he talks to me from an industrial unit on the edge of Hartlepool where the name of his own business – Blast N Go – is written in black marker pen on the door of the old container he uses as a workshop.

After struggling to find full-time work, he has joined the 4.2 million people in the UK who are self-employed.

Danny was introduced to shot blasting – a commercial process to clean corroded metal by spraying it with pressurised dust – at the age of 19. He had finally found a job he enjoyed.

But when work dried up, he was made redundant.

“I was really depressed and down,” Danny tells me. “The only way to move forward in my life was to set up my own business. I couldn’t get a job, so I thought I’d do it myself.”

They run a six-week programme to build skills like writing a business plan, marketing, money management and legal essentials. 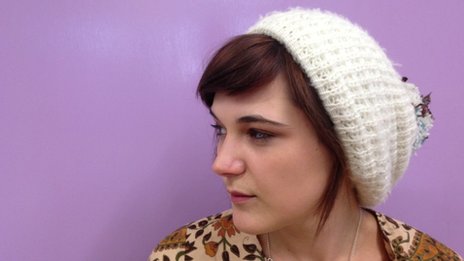 Kathryn Scott-Fletcher: “People used to stop me on the street and ask to buy my hats”

“It’s really about making sure they know everything they need to know in terms of the basics to get started in self-employment,” says Christine Hall, Amacus’s managing director.

Most of the delegates on the programme are referred by the Jobcentre, and continue to receive benefits until they register as self-employed and begin trading.

Schemes to help people set up in business are not new – the Prince’s Trust celebrated the 30th anniversary of its enterprise scheme in 2013.

But increasingly those who have been unemployed for a significant period are turning to self-employment after never previously considering starting a business.

According to official figures, the number of self-employed people in the UK has risen 374,000 since the start of the financial crisis, reaching 4.2 million in April this year. 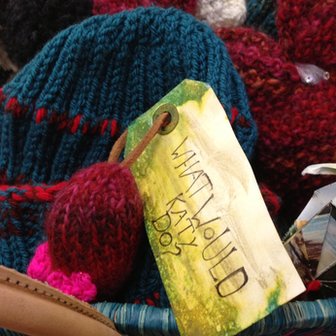 Kathryn knits at least three hats each day by hand

“The dole is pretty bleak, because there’s no reason to get up and no jobs to apply for,” she tells me.

Although she had never thought about setting up a business, she joined the Leapfrog programme and had the idea for a knitwear business – called What would Katy do?

She had repeatedly been stopped on the street and asked where she had bought her woollen hats. She is a prolific knitter and had been making them herself for years.

“Overheads are really low, because I’m working from home. Each hat hardly costs me anything at all to make,” she says.

Danny and Kathryn, like others, are able to apply for funding, including the new enterprise allowance (NEA), which provides a weekly sum to help them support themselves while their business become established, as well as access to up to £1,000 of loan funds.

The Department for Work and Pensions estimates that 20,000 new businesses have been created since April 2011 after taking advantage of this funding.

But the NEA has its critics.

“The problem is that a lot of the people who are supported by these programmes don’t have either the skills, motivation or in many cases, enough of the right kind of financial backing to start a viable business,” says Nigel Meacher, director of the Institute of Employment Studies.

“What we don’t tend to find is that these schemes make a massive difference and create a huge number of long-term viable businesses.”

Source: Department for Work and Pensions

The most recent figures available from the Office for National Statistics show that of the 235,000 small companies formed in 2010, just over 13% had failed before the end of their first year of business.

A DWP spokesman defended the scheme, saying it has “a clear focus on business ideas that are viable, sustainable and which have the potential for growth in the future”.

Professor Peter Urwin, director of the Centre for Employment Research at the University of Westminster, says we have to accept that the first-time self-employed are likely to have a high rate of failure.

“That doesn’t mean it isn’t worth doing; you only need one of these things to work and you might create 1,000 jobs,” he says.

“£1,000 doesn’t get you very far. My main concern with the programme is that is could be a bit more ambitious – trust people more.”

For Danny Burnside, self-employment has given him the opportunity to stand on his own feet.

“My kids are getting older and I need to start providing,” he tells me.